The night of August 21, 2017, the guy shown in this security camera picture walked up onto the front porch of our home, looked around and left. He was fast. It was early evening. We were sitting on the couch. Never saw him. 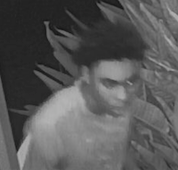 This smaller version of the picture shows his face better.

My security camera has an infrared mode, and most people don’t see the red light that is being cast on the area, so this guy probably has no idea he’s been photographed. He also probably didn’t see the surveillance sticker on the window.

During the summer/fall of 2017, a nearby friend had his house broken into from the back yard. He was away, so they stole several items. Police told him that a team was moving through the area, from Alhambra, into San Gabriel, and likely on to Temple City. One of their techniques was to knock on the door earlier in the day, ask some question, probably scope-out the house & owners, and then possibly return later.

I haven’t heard of more break-ins, and nobody else has appeared on my cameras.

It’s spring again. Our 3rd spring in San Gabriel, CA. This year, the grey demon started in February. Probably did the same during previous years. He/she didn’t seem so bad, and I briefly hoped that this year might be different. You know, that maybe the night caller from hell wouldn’t like our backyard as much […]

Mosquitoes. Hate them. Especially the Asian Tiger Mosquitoes that we have in San Gabriel. Especially the ones that carry West Nile Virus. Sad and true. Identification can start with by killing one (Good job! +1 point), and then, if you didn’t do that with too much enthusiasm, you should be able to inspect the dead insect. […]

As Mr. Gates wrote: “This animal kills more people in a day than sharks do in a century”. Regarding, mosquitoes, I prefer the word “demon” to “animal” but that may be more of a personal problem/perspective than an accurate description. Read his blog and see why Shark Week on the television is kinda funny (not […]